RINDGE, N.H. (May 2, 2012) -- Franklin Pierce University's Rick Senatore was named the 2012 Northeast-10 Conference Men's Lacrosse Coach of the Year on Wednesday, as announced by the league. The voting for the award was done by the league's head coaches in the sport.

It marks the second time in as many seasons the program claimed a major award from the NE-10, as Eddie Noonan (Foxboro, Mass.) was named the league's rookie of the year in 2011. They are the first two major awards in program history.

Senatore claimed the league's top coaching award after guiding Franklin Pierce to a 7-6 record, which marked the first winning season in program history. The Ravens finished 5-5 in league games and finished in a tie for fifth place in the NE-10. The conference finish was the highest in program history and came just two months after Franklin Pierce was picked to finish 10th in the league's preseason poll.

The seven overall victories and five conference wins established new program single season records in those respective categories. The Ravens had some incredible wins this season, including defeating Southern New Hampshire, Saint Anselm and Pace for the first time in program history. The win over St. A's came via an 11-10 decision over the No. 9-nationally ranked Hawks back on April 14 in Manchester. It marked Franklin Pierce's first win ever over a nationally-ranked foe. The Ravens concluded their 2012 season this past Saturday with a 10-9 triumph over Pace, thus sealing a winning record.

Senatore has guided the program to unparalleled heights in his first three seasons in Rindge. He has led the Ravens to 15 wins over his three years, which is an impressive accomplishment considering the program won a total of 17 games from its inaugural season of 1998 through the 2009 campaign. Franklin Pierce has appeared in the NEILA Division II Poll for at least one week in each of Senatore's first three seasons; after having never appeared in the poll prior to his arrival.

It marks the second NE-10 coach-of-the-year award for Senatore, as he also gained the honor in 2007 while guiding the Saint Anselm program. The Hawks won four of their final five games that season to help Senatore collect the honor.

At least one Raven has garnered some form of All-NE-10 recognition during each of Senatore's three seasons. In addition to Noonan collecting top rookie honors last season, Ben McDannell (Morrisville, Pa.) was named to the NE-10 All-Rookie Team in 2010. This season, freshman goalie Don Denman (Exeter, N.H.) was named to the league's rookie squad, as that announcement was also made on Wednesday by the NE-10.

Denman posted a 7-6 record this season, including a .555 save percentage and a 9.14 goals against average. He made double-digit saves in all but five contests this year, including a career-high tying 16 stops versus Merrimack and Le Moyne. His seven victories were the most by a Franklin Pierce goalie for a single season. 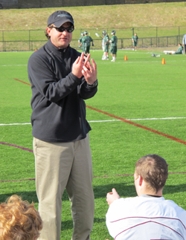